FORT COLLINS, COLORADO, February 24, 1998 – Last year, 1,057 rapid prototyping (RP) systems were sold worldwide, compared to 787 in 1996, according to a new industry report announced today by Wohlers Associates, Inc.  This represents unit sales growth of 34% for the year, compared to growth of 46% the year before.  Since 1988, a total of 3,289 RP systems have been sold to industrial, academic, and government sites around the world. 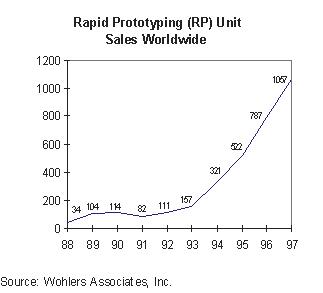 The top three unit sales performers last year were RP system manufacturers 3D Systems, Stratasys, and Sanders Prototype, with sales of 278, 260, and 152 systems, respectively. 3D Systems has sold more RP systems in the past 10 years than any other company in the world.  With its Stereolithography and Actua products, 3D Systems was also the industry leader in annual revenues in 1997.  With sales of about $90.3 million, the company outsold its nearest competitor by a margin of three to one.

“Unit sales continued to grow last year, but money spent on RP products and services was down considerably,” said Terry Wohlers, principal consultant and president of Wohlers Associates, Inc.  “Last year, the industry grew by a disappointing 7.5%, as measured by revenue growth, compared to 42.6% the year before,” he explained.  Indeed, revenue growth has slowed over the past year, but demand will grow as the technology penetrates key markets, such as consumer products, business machines, medical devices, automobiles, and aircraft.  Rapid tooling will help expand the market for new systems as manufacturing organizations develop and refine methods of creating molds for prototypes using RP technology.

Wohlers reports developments and trends in a new publication titled Rapid Prototyping & Tooling State of the Industry: 1998 Worldwide Progress Report.  The report focuses on the industries being served, revenue growth, service bureaus, time-to-market issues, new approaches to metal tooling, materials, and software for RP.  Also, the report reviews new systems being developed, trends in CAD solid modeling, 3D printing for concept modeling, medical modeling, reverse engineering, the future of RP, and the progress of the system manufacturers in the US, Europe, and Asia.

The 204-page soft bound publication, available in March, includes 28 charts and graphs, 16 tables, and 34 photographs and illustrations.  Inside the US, the report is $295, which includes shipping.  Outside the US, it is $325, which includes shipping.  The report’s table of contents, as well as additional information on the RP market and industry, are available free of charge.