The primary rapid prototyping (RP) market grew by 49% to an impressive $295.1 million in 1995. This figure includes revenues generated worldwide from product sales and services. The secondary market segment was estimated at $176.1 million for 1995, bringing the annual total to more than $471 million. The secondary market includes secondary tooling created from RP patterns, and castings and duplicate parts produced from this tooling.

“Soon, the RP industry will be measured in billions of dollars, Deutsche Marks, pounds, and yen,” explained Terry Wohlers, principal consultant and president of Wohlers Associates. “New technologies, products, and applications have led to a new level of excitement in the rapid prototyping (RP) industry. These developments, coupled with strong growth in product sales and services, presents a very optimistic view of the RP industry and its future,” Wohlers observed.

Service bureaus (SBs) make up a large and vibrant part of the industry. The 1995 SB market was estimated at $135.5 million, representing annual growth of almost 43%. Meanwhile, a new market is beginning to unfold as US system manufacturers roll out less expensive, office-friendly systems targeted at product designers. 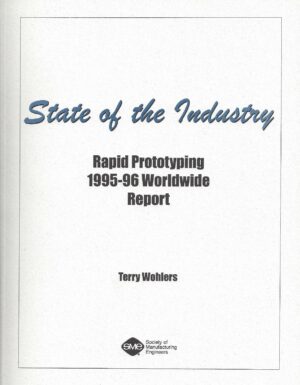 What Others are Saying

“Very easy to read. It gave me just what I was looking for.”
Douglas Freitag, Bayside Materials Technology

“Whether one is thinking of purchasing an RP device, checking into the sales of a particular company for investment purposes, or just desiring more information, Wohlers’ report delivers at every level.”
Joe Greco, Desktop Engineering Magazine

“It is very comprehensive, well organized, and well written. We will be pouring over the details for some time to come.”
Mike Rynerson, ExtrudeHone

“The section on rapid tooling is particularly interesting. Wohlers systematically looks at all the competing technologies on the market today and provides detailed information on how to best apply each of them.”
Engineering Automation Report

“As always, you have done a spectacular job collecting information from around the world on our ever-changing industry. I commend you on the depth and breadth of your labors.”
Marina Hatsopoulos, Z Corp.