CHICAGO, ILLINOIS, USA, May 13, 2003—Wohlers Associates, Inc. today announced the availability of Wohlers Report 2003, a worldwide progress report on the rapid prototyping, tooling, and manufacturing state of the industry. In the 270-page market study, the company reveals areas of growth and opportunity, as well as technologies and market segments with disappointing results. Despite some areas of decline in rapid prototyping, Wohlers Associates reports impressive levels of R&D, and an industry that is poised for growth in both technologies and applications.

Wohlers Report 2003 covers all facets of the industry, including business, product, market, technology, and application. Forty-five experts, 40 service providers, 26 system manufacturers, and countless others assisted with its development. To support the review and analysis, the softbound publication includes 27 charts and graphs, 31 tables, 97 photographs and illustrations, and seven appendices.

“3D printing was a bright spot in 2002,” said Terry Wohlers, principal author of the report and president of Wohlers Associates. “However, there was a sharp contrast between the sales of 3D printers and conventional rapid prototyping systems. As the industry develops and matures, there will be a dramatic increase in the application of 3D printing technology, possibly at the expense of the conventional systems,” he explained. As presented in the following graph (showing annual unit sales), the rise of 3D printers, most commonly used for concept modeling, has begun. 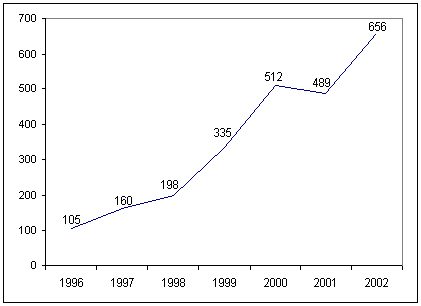 “Years of growth and decline in rapid prototyping have become the norm,” Wohlers explained. “With companies constantly entering and departing this industry, it is no wonder so many are unclear about its future.” Yet RP continues to grip the interest and imagination of many around the world. Once considered to be just a tool for prototyping, RP has expanded into an impressive range of industries and applications. In the future, it will find its way into organizations and industries in ways that are hard to fathom today. “A staggering number of R&D projects are underway around the world, and much of this work is turning into patents and products,” Wohlers said.

Organizations are now extending the application of RP technology to the production of finished goods. Some believe this practice, termed rapid manufacturing, will rapidly grow and ultimately overshadow the rapid prototyping and rapid tooling markets. The report includes a new section on the opportunities, applications, and benefits of rapid manufacturing, as well as the associated obstacles and considerations.

The release of the new report coincides with the Rapid Prototyping & Manufacturing 2003 Conference and Exposition (Chicago, Illinois), which begins today and ends on May 15. Following Colonel Mike Mulane, keynote speaker and distinguished astronaut, in the plenary session of the conference, Terry Wohlers presented highlights of the report in his annual State of the Industry address. RP&M 2003 marks the 11th year in which Wohlers has presented his views, research, analysis, and opinions on this exciting industry at the RP&M event.

The new report sells for $395 in the U.S. and $425 in all other countries. The report’s table of contents, as well as additional information on the RP market and industry, are available at https://wohlersassociates.com.

Wohlers Associates, Inc. is a 17-year-old independent consulting firm that works closely with manufacturing organizations to identify the best approaches to rapid product development. As the company’s principal consultant, Terry Wohlers tracks new methods and technologies and determines a strategic direction that gives companies an edge. His highly sought after views and opinions come from years of collecting and analyzing market data, coupled with work as an advisor to major organizations in the Americas, Europe, the Middle East, and Asia

The following 45 individuals and organizations contributed to Wohlers Report 2003 and served as important sources for information.