Have you ever wondered how wind turbine blades are made? I have. Luckily, I was a part of a special tour initiated by SME Chapter 354 that gave a good view into the manufacturing process. I was one of 27 that toured the Vestas blade factory in Windsor, Colorado earlier this week. The blades produced at the impressive facility are 54 meters (178 feet) in length, weigh seven tons, and amazingly complex. When a blade is at work, the speed at its tip is an astounding 251 kph (156 mph).

Denmark-based Vestas began to make wind turbines in 1979 and leads in the production and worldwide sales, with more than 16% of the market. GE, Siemens, and many relatively small companies are also in the business. Vestas has factories in Denmark, Germany, Italy, Spain, China, India, and Colorado. The Windsor and Brighton, Colorado factories produce a significant number of all blades from the company. Windsor, alone, produces about 2,000 annually. 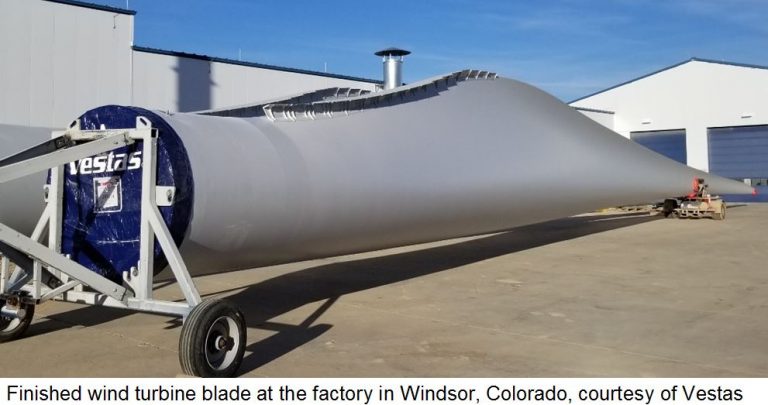 The visit began with an excellent presentation by Hans Jespersen, vice president and general manager of the Vestas blade factory in Windsor. Six other employees were on hand to answer questions and serve as our tour guides. Molds used to produce the blades are the largest—and definitely the longest—I have seen in 30+ years of visiting manufacturing facilities worldwide. The molds are made of a composite material, and the blades, themselves, are made predominantly of fiberglass and epoxy. On the surface, it may sound relatively straightforward, but sophisticated methods, intellectual property, and decades of experience go into the production of the blades.

Thanks to SME Chapter 354 for setting up the tour, and special thanks to the people at Vestas for sharing their time and expertise. Our tour guide, Phil McCarthy, senior production manager at the company, did an outstanding job in showing and explaining the many manufacturing steps and processes at the company. The tour was among the best I have taken in recent years. Vestas rolled out the “red carpet,” spent a lot of time with us, and answered many questions. I now have an even greater appreciation for wind turbines and their contribution to clean energy.