U.S. Comeback in AM

Is the U.S. making a comeback in additive manufacturing? Some might question whether the U.S. had fallen back in its position. In the 2000s, the U.S. definitely lost ground in a number of areas to the likes of China and Germany. One area is in the production of industrial AM systems, which are those that sell for more than $5,000. Consider that 52 manufacturers—32 Chinese and 20 German—produced and sold industrial AM systems in 2018, according to our research for Wohlers Report 2019, which was published less than two weeks ago.

The number of companies producing industrial AM systems may be an interesting metric, but it is only one of several used to measure a country’s position in AM. Others, such as the adoption and use of AM, are arguably more important, but difficult to measure. Due to widespread and hard-to-trace growth in many regions of the world, data is not as forthcoming as it was 10+ years ago. Even so, the U.S. is believed to be home to more than one-third of all industrial AM systems. This compares to 10.6% in China and 8.3% in Germany, as shown in the following chart. It represents cumulative installations from 1988 through 2018. 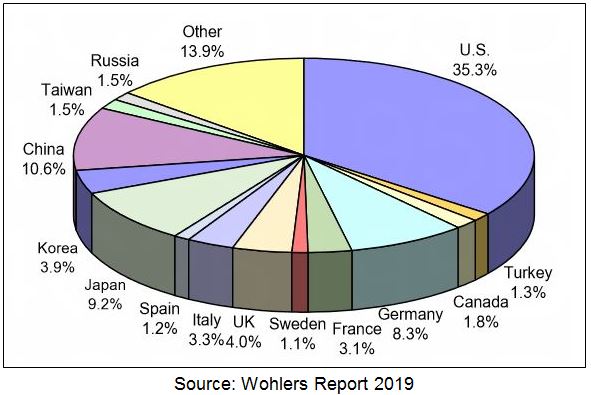 The number of manufacturers of industrial AM systems grew by 50% to 33 last year in the U.S., which was a surprise to some. Also, we believe the U.S. is at or near the top in R&D related to AM hardware, software, applications, and services, compared to other countries. Whether one considers the number of system manufacturers, the adoption of systems, or R&D spending, the U.S. is in a solid position with competitive nations worldwide.