Growth of Metal AM Systems

Note: The following was excerpted from “Part 4: Industry Growth” in Wohlers Report 2014.

Additive manufacturing (AM) systems for metal parts are increasing in popularity worldwide, as shown in the following chart. Wohlers Associates has been tracking this market segment for 14 years, but this is only the second time to publish metal-based AM machine unit sales by year in Wohlers Report 2014. As the chart indicates, 348 of these machines were sold in 2013, compared to 198 in 2012—growth of an impressive 75.8%. 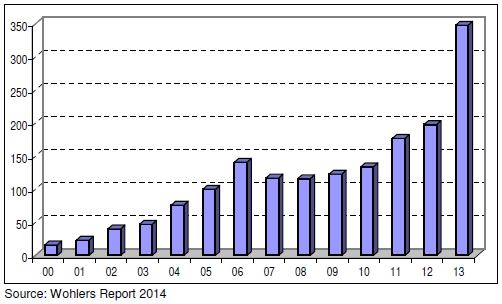 The chart shows continued growth through 2006, followed by a multi-year slump. Much of the growth and subsequent decline were due to ExOne’s Imagen dental systems, which made gold copings for crowns and bridges. ExOne made a big push with this system until 2007, when it was pulled from the market. It is believed the company stopped offering the machine due to the increased price of gold and other factors related to cost and market acceptance.