An Era of Crowdsourced Funding

Historically, companies were launched using personal savings or with support from family, friends, or angel investors. The funding system changed when Kickstarter was launched in 2009. It has since become one of the most popular crowdfunding platforms for entrepreneurs to raise capital and launch businesses.

With Kickstarter, people can give any amount of money toward a project they want to back. Only about 39% of projects reach their fundraising goals. Yet, in the past 10 years, Kickstarter claims that more than $5.9 billion has been raised for individual projects. In 2012, Formlabs launched a project to fund its Form 1 vat photopolymerization 3D printer. After just 30 days, 2,068 people backed the project with nearly $3 million in crowdsourced funding.

Today, launching a Kickstarter campaign seems almost ubiquitous for an entrepreneur, especially for 3D printing hobbyists and makers. At the time of this posting, a search on Kickstarter for 3D print produced 1,865 projects. Recently, Craig Brice, PhD, of the Colorado School of Mines launched a Kickstarter campaign for a metal 3D-printed wallet. (Craig served as my advisor when I completed a master’s degree in advanced manufacturing at the university.) The shell is made from aerospace-grade titanium and two sheets of carbon fiber. As expected, the wallet is extremely strong. The logo, color, and polish level can be personalized. 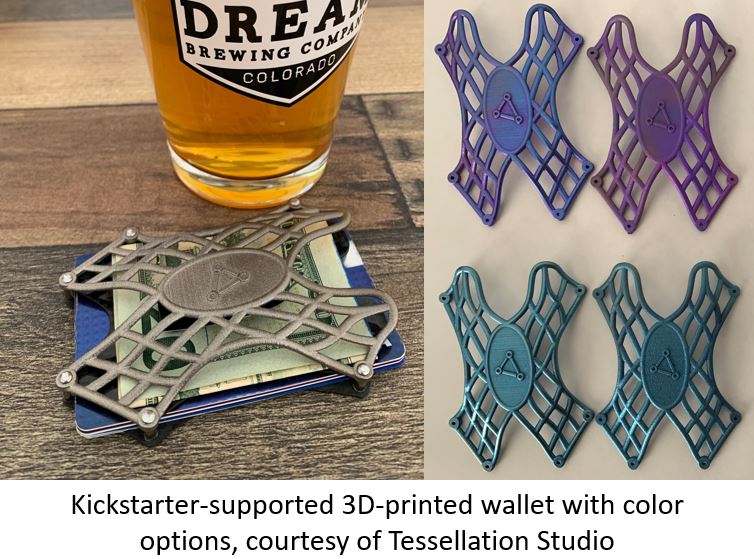 The crowdsourced funding model has its merits. Entrepreneurs can test their ideas with real customers. Support can later come from other investors, if needed, with data showing that the product has appeal. Crowdfunding is not necessarily how capital is raised when scaling a company. It remains mostly for startups.