Home / News / AM Adoption in Aerospace

At an impressive pace, companies in the aerospace industry are building in-house capacity and expanding the number of certified suppliers in additive manufacturing. The Federal Aviation Administration and others have indicated to me that a half dozen or more metal AM parts have been certified for flight. In the 2014 to 2016 time frame, I saw more than 30 new designs for metal AM at Airbus and its subsidiary Premium AEROTEC. It is believed that hundreds of different polymer AM parts (i.e., part numbers) are flying on aircraft around the world. Boeing, alone, had more than 60,000 parts flying on a minimum of 16 different military and commercial aircraft in June 2018.

The following bracket design, created by MBFZ Toolcraft GmbH for Airbus, was produced in titanium. The 14 parts in the original design were consolidated into two and weight was reduced by about half. Go to this page for a much larger version of the bracket. Scroll down to near the bottom to see it. 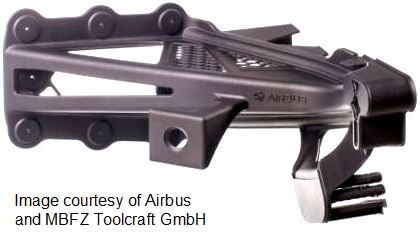 One aerospace company that asked not to be named claimed it would be flying 25 different AM designs by the end of 2018. It expected to have an astounding 300 new designs certified for AM by the end of this year. It is believed that most are for metal AM. When considering that thousands of aerospace companies are in operation around the world, the potential for AM parts in this industrial segment is significant. As Michael Gorelik of the FAA stated at the America Makes MMX in Youngstown, Ohio in October 2018, “The transition to safety-critical AM parts will occur sooner than initially expected.”