Last month, the Australian government announced the funding of a new program that could give 3D printing and additive manufacturing (AM) a boost in the country. On May 26, the Honorable Ian Macfarlane, Australia’s Minister for Industry and Science, announced the Innovative Manufacturing Cooperative Research Center (IMCRC). Much of the program is expected to center on AM and related methods and technologies. The focus on AM may have been partly inspired by America Makes, coupled with the investments and alliances associated with the U.S. initiative.

The IMCRC is a collaboration of 14 manufacturing companies, 16 universities, and CSIRO, which is Australia’s top federal agency for scientific research. Four industry bodies will help recruit more than 300 additional small and medium-sized enterprises to serve as “portal partners.” As part of the program launch, the Commonwealth is providing A$40 million (US$31 million). An additional A$210 million (US$163 million) is expected in cash and in-kind contributions from industry, research institutes, and state governments, bringing the total investment to A$250 million (US$194 million).

The announcement lingered for about nine months, so many people welcomed the long-awaited news. Senior consultant Tim Caffrey and I were in Australia when the announcement was made, with the IMCRC being the center of attention. We believe that it will indeed provide a much-needed lift to advanced manufacturing in the country, but as the saying goes, “the devil is in the details.” It will be interesting to observe how Australia sorts through the maze of challenges associated with coordinating so many people, organizations, and agendas. As with America Makes and other national efforts, the challenge and opportunity is to make a difference, and that’s easier said than done.

The day before the announcement, CSIRO officially launched its new and impressive Lab 22. Tim and I were present to participate in the festivities and meet many of the talented researchers and scientists at CSIRO. Lab 22 was established as center of excellence for organizations wanting to explore metal AM, so it welcomes participation by organizations of all types. 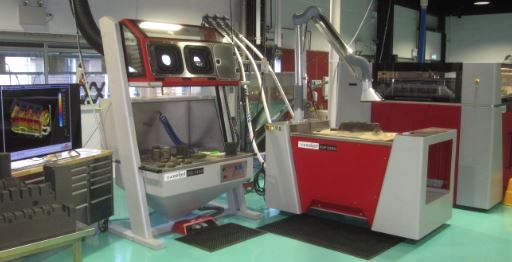 Equipment in the new lab includes an Arcam A1 electron beam melting machine, a Concept Laser M2 laser-based machine, and a Voxeljet VX1000 machine for producing sand casting molds and cores. The lab was established as a center of excellence for organizations wanting to explore metal AM, so it welcomes participation by organizations of all types. CSIRO also has an Optomec LENS MR-7 directed energy deposition machine and a cold spray plasma additive process.

Australia is establishing a strong foundation in AM. The adoption of the technology in the private sector may not be as great as it is in some advanced countries, but the pieces are coming together for it to close the gap. The Melbourne area, alone, may well have the highest mix of metal AM systems in the world (in an area of this size), with nine direct metal AM systems. Among them are machines from Arcam, Concept Laser, EOS, Optomec, SLM Solutions, and Trumpf. The Concept Laser Xline 1000R at Monash University, and two Trumpf TruLaser 7040 machines, one each at Monash and RMIT University’s Advance Manufacturing Precinct, are very large, both in size and investment.