By Noah Mostow and Terry Wohlers

Nearly every week, we see a new headline on 3D-printed meat. More than a handful of companies are working on it, but none look like the real thing. If we step back from the visual appearance of these first prototypes, it could be an excellent application of additive manufacturing. Full disclosure: Only occasionally do I eat meat. I prefer alternative forms of protein for many of reasons, including taste and ease of cooking.

It is uncertain whether plant-based meats will develop to become exactly like beef, pork, lamb, or chicken, but it is likely to get close. 3D-printed meat alternatives, such as Beyond Meat and Redefine Meat, are not meat as we know it. If you have tried an Impossible burger and concluded it does not taste like meat, you are right because it is not. Most meat substitutes include a combination of water, legume proteins, oil, and seasoning. 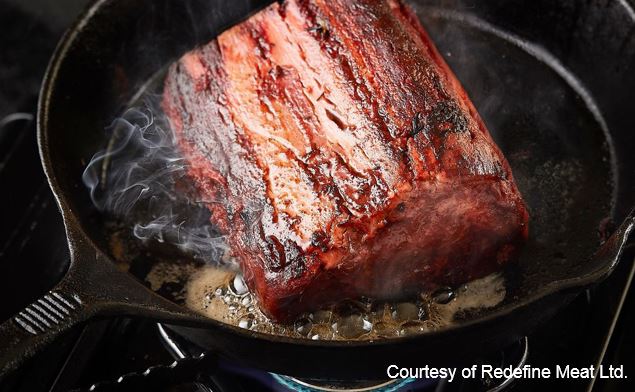 Meat alternatives is a new category of “meat” that are safer to cook and will someday be less expensive. To many of us, they also taste great. 3D printing will take it from burgers and sausages to something that looks and cooks like a prime cut of beef and maybe one day, more complex structures, such as chicken wings. With 3D printing, it may be possible to someday produce a steak that offers a better experience, compared to an actual steak.

If you have never tried a meat alternative, I urge you to give it a try, while considering how the ingredients are put together. 3D printing will eventually revolutionize meat production by optimizing the most ideal marble and the perfect fall-off-the-bone ribs.

Beyond these reasons to get excited about 3D-printed meat, it will have a major impact on reducing carbon emissions from animal-based proteins and feedlots. These alternative products could go a significant distance in feeding the world’s population.