DEARBORN, MICHIGAN, USA, May 11, 2004—Wohlers Associates, Inc. today announced the availability of Wohlers Report 2004, a worldwide progress report on the rapid prototyping, tooling, and manufacturing state of the industry. The report covers all facets of the industry, including business, product, market, technology, research, and application. Forty-five experts, 42 service providers, 28 system manufacturers, and countless others assisted with its development. To support the review and analysis, the softbound publication includes 23 charts and graphs, 38 tables, 79 photographs and illustrations, and seven appendices.

Last year, the rapid prototyping industry reversed its downward trend, the 270-page report reveals. Revenues returned to levels of the past, with product revenues gaining impressively. “Low-end machine sales soared to unprecedented heights, with 3D printers becoming the crown jewel of the RP industry,” stated Terry Wohlers, principal author of the report and president of Wohlers Associates. “With the increase in the number of machines sold and installed, the total number of models being produced annually also grew,” he explained. (See the following graph.) “Consequently, material sales were strong.” 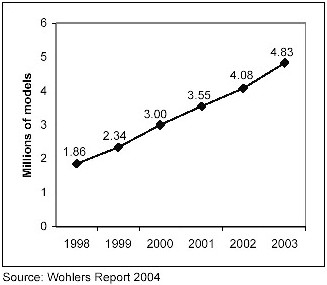 The release of the new report coincides with the Society of Manufacturing Engineer’s Rapid Prototyping & Manufacturing 2004 Conference and Exposition, which began today and ends May 13 here in Dearborn. In today’s plenary session, Terry Wohlers presented highlights of the report in his annual State of the Industry address. RP&M 2004 marks the 12th consecutive year in which Wohlers has presented his views, analysis, and opinions on this constantly changing industry at the RP&M event.

In today’s presentation and in the report, Wohlers explained that Stratasys is inching its way toward dominance as it unseats 3D Systems as the king of rapid prototyping. And Z Corporation has moved up to the number two position in annual unit sales. Meanwhile, the U.S. continues to maintain its grip on both the production and consumption of RP systems.

The new report sells for $425 in the U.S. and $445 in all other countries. The report’s table of contents, as well as additional information on the RP market and industry, are available at https://wohlersassociates.com.

Wohlers Associates, Inc. is an 18-year-old independent consulting firm that works closely with manufacturing organizations to identify the best approaches to rapid product development. As the company’s principal consultant, Terry Wohlers tracks new methods and technologies and determines a strategic direction that gives companies an edge. His highly sought-after views and opinions come from years of collecting and analyzing market data, coupled with work as an advisor to major organizations in the Americas, Europe, the Middle East, and Asia.

The following 45 individuals and organizations contributed to Wohlers Report 2004 and served as important sources for information.